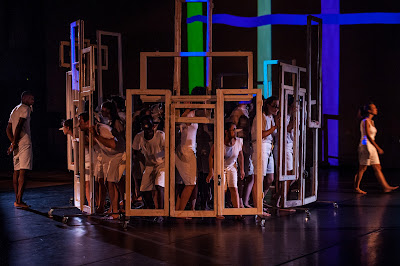 The second Cre-Actors’ training course in Bologna!
An important step is approaching for the Cre-Actors project: the training course held by the Italian partners of Teatro dell’Argine in Bologna.
The course will run from May 26th to May 30th and will involve a large group of people both locally and from the partners’ countries, Sweden, Ireland and France.
In order to make the most of these 5 days, all the participants have been asked to watch and read some materials about the artistic production of the Bolognese company: videos of theatre pieces, documentaries on special projects, dossiers and descriptions about artistic creations with intercultural groups and/or in intercultural contexts.
Find out more by reading the Theatre-Love Letter to the Cre-Actors and the programme below, containing detailed info on the planned process.
And follow us on this blog and on our Facebook page!
A Theatre-Love Letter to the Cre-Actors
Dear Cre-Actors,
first of all… Be welcome, bienvenu(e)s, välkommen, benvenuti/e to our home and to our theatre world!
As you may have already heard, the Teatro dell’Argine is a strange multifaceted bunch of people and of theatre actions and projects! But we’ve only got five days to exchange what we do, and so, we have decided to share with you some of the exercises, practices, structures, but also ways of doing and flavours of our work ON THE EDGE or BEYOND THE BORDERS between artistic, (trans)cultural, educational, social.
That is to say, an artistic work that can be done with professional and non-professional artists, in theatres and in non-theatres, in places and in contexts such as prisons, reception centres for refugees, hospitals, streets, squares, city centres and suburbs in San Lazzaro, Bologna, Emilia-Romagna, Italy, as well as Tunisia, Denmark, Palestine, UK, France, Lebanon and so on!
This means that we are asking you to prepare something… And also, somehow, to come un-prepared, open to the unexpected. Come as you are! With all the incredible theatrical tools that you have, but also with the propension to let things happen.
Teatro dell'Argine
About the Training Course
Who. The working group will include the Cre-Actors teams from Italy, Ireland, Sweden and France, along with some participants from the local associated partners and community members. Before the Covid pandemic, this would have meant many different people, intercultural groups and individuals, sharing the ground and the process with TdA’s workshop leaders. Unfortunately, the Covid era has dispersed and dissolved most of this human heritage and richness, built throughout almost 30 years of work on the local area. And particularly people with a refugee or migrant background who have recently arrived in Italy (once representing the majority of those working with TdA): Covid has made them even more invisible than before. So, the partners will arrive in a moment when not everybody is there (and we may not let too many people in the working venue because of the Covid restrictions, as well). TdA is slowly and softly reconnecting with the many known and with the newly arrived persons, as well as with a lot of teenagers of many different origins, including native Italians, who were also very much worn out by this long pandemic.
What. The course will lead the participants through the practices and processes used by Teatro dell’Argine towards intercultural collective creation, with specific attention to processes involving professionals and nonprofessionals together, and specific formats of participatory theatre developed over 28 years’ experience in the field. This may include: the use of a playful approach to stimulate creativity, facilitate the participation of people of all levels and experiences (professionals and nonprofessionals coming from different cultural and social backgrounds), and foster self-empowerment; the acquisition of skills for theatre beginners and a co-creative dimension; outreach into refugee and migrant communities; creating theatre around refugee and migrant perspectives and worlds while safeguarding participants; working across languages and without a common language; using specific formats and/or technologies to create site-specific events within different communities in short intensive periods of time. Sessions will generally have 3 parts: warm-up, training and sharing of practices and structures to build a character or a scene or specific atmospheres; improvisation work starting from different inputs (music, scenography modules, short texts…); interviews or writing exercises as useful tools for intercultural creation. TdA would also like to allow each day 15-30 minutes for Q&A or reflections by the group.
Why. TdA is a multifaceted organization with at least three different actions that could be interesting for the project aims: 1) theatre with professional artists dealing with hot contemporary issues (like migration, for example), where the show is the final and most important aim; 2) theatre with nonprofessionals of all ages and background, including people with disabilities, or detained in prisons, or having a migration background (refugees, asylum seekers, foreign students or workers…) in many different contexts; and 3) projects of participatory theatre, mixing professionals and nonprofessionals in small or huge processes where co-creation is an essential part.
Since 5 days are not enough to explore all the three properly, and since we all want the process to be not only a sharing of tools, but also a more universal set of questions, competences needed and lessons learned, TdA will focus on actions 2 and 3, that is to say some of the practices and competences applied when you work at the border between art, education and social, involving people that are nonprofessional artists, along with professionals in collective theatrical creation.
NB! Part of the process has to do with surprise and not knowing where we’re going; so, not everything is specified in the programme. ☺
NBB! As in every artistic and educational process, the programme could be changed, even day by day, to be better adapted to the group, or to the discoveries and inventions made along the path. 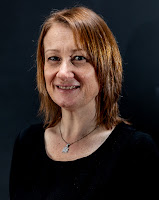 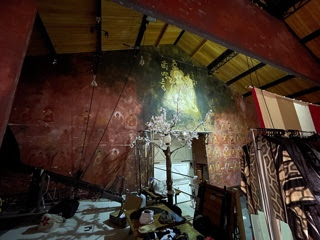 Hic et nunc: at the same time in the same place

The 1 st training course of the Cre-Actors' project in Paris After months of stops and closures, after several virtual meetings, after so many postponements due to the still ongoing pandemic situation, on July 26 th to 30 th 2021, the Cre-Actors crew finally convened to exchange and work in person at the same time in the same place. “ At the same time in the same place”: this is really the true specific magic of theatre, as of many rituals, be them religious or secular, providing that people gather not only to “assist” in something acted by other people, but really to live an experience together hic et nunc (here and now). And what a place to start! Our first training course was held at the Théâtre du Soleil in Paris, and precisely on the stage that was hosting the scenery (and the spirit) of the new production directed by Ariane Mnouchkine, having Dominique Jambert and Vincent Mangado as wise, skilful and smiling guides, and a crew of 18 Cre-Actors from many different place 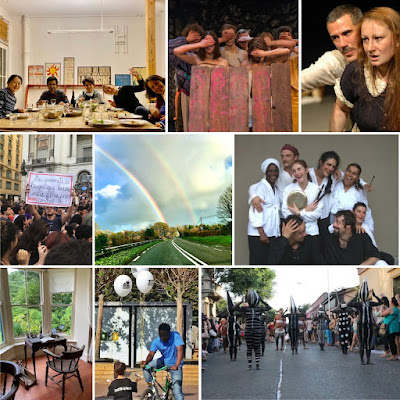 Done!   The third stage of our meetings and work sessions is accomplished! It took place in Dublin, or rather in Tallaght, from July 25 to 29. During this scorching period, the Irish freshness was very soothing. And the joyful atmosphere, with no other concern than that of research and discovery carried out among friends, of the quest for theatre… such a volatile art! We brought together around twenty participants, around the three companies (Border Crossings, Teatro dell'Argine, Théâtre du Soleil) and The Fence dramaturgs. And the newcomers also reflected the face of the Ireland of the future: We had with us, in addition to the usual teams, Irish actors or dancers from Argentina, Brazil,  from Moldova... or from Kerry! What richness, these different experiences!  We knew it, but it was confirmed once again: there is no unity without diversity! As Michael Walling had announced, the question of language very quickly became central to the work: How do you convey a story or an experie